The Laws of Chess cannot cover all possible situations that may arise during a game, nor can they regulate all administrative questions. Where cases are not precisely regulated by an Article of the Laws, it should be possible to reach a correct decision by studying analogous situations, which are discussed in the Laws. The Laws assume that arbiters have the necessary competence, sound judgement and absolute objectivity. Too detailed a rule might deprive the arbiter of his freedom of judgement and thus prevent him from finding the solution to a problem dictated by fairness, logic and special factors. FIDE appeals to all chess players and federations to accept this view.

The role and purpose of the Arbiter is to make sure that the games are played in accordance with the Laws of Chess, under the best conditions possible. It is clear that it is impossible to cover every situation that may arise, so the decisions of the Arbiter must also be based on arriving at a fair solution to problems by means of sound reasoning and practical common sense.
The roles of the arbiter:
13.1 The arbiter shall see that the Laws of Chess are strictly observed.

13.3 The arbiter shall observe the games, especially when the players are short of time, enforce decisions he has made and impose penalties on players where appropriate.

13.6 The arbiter must not intervene in a game except in cases described by the Laws of Chess. He shall not indicate the number of moves made, except in applying Article 8.5, when at least one player has used all his time. The arbiter shall refrain from informing a player that his opponent has completed a move.

13.7 Spectators and players in other games are not to speak about or otherwise interfere in a game. If necessary, the arbiter may expel offenders from the playing venue. 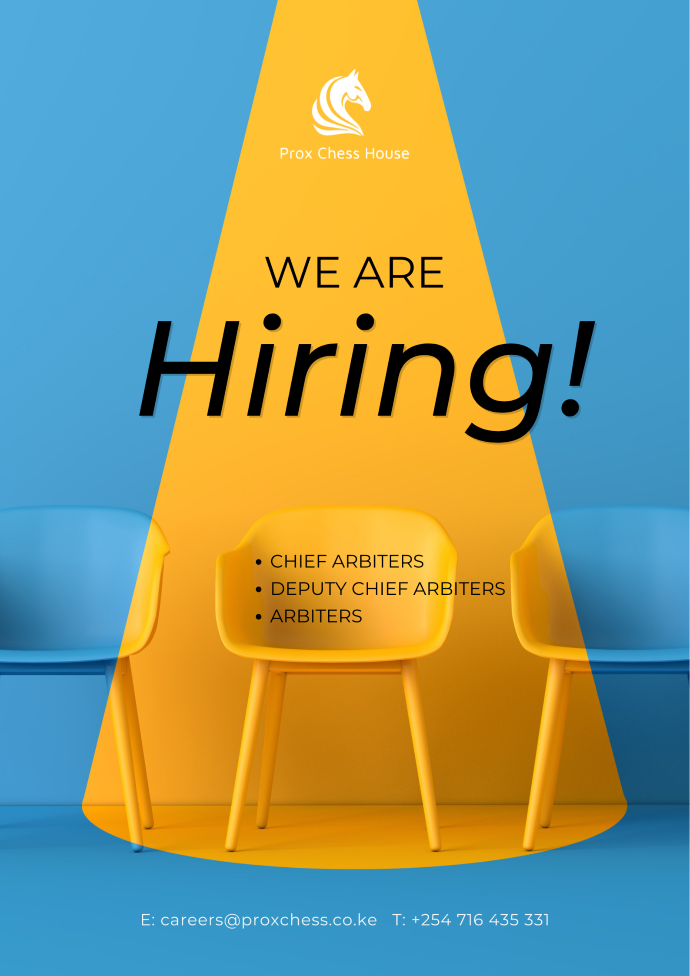 Please submit a resume, cover letter, and the names and contact information of 3 professional references to [email protected] by June 26, 5 p.m. EAT. Include “Arbitration Job” in the subject of your email submission. Interviews will take place the week of June 28, with final decisions by July 1.